SCC BATTLE OF THE BANDS WINNER 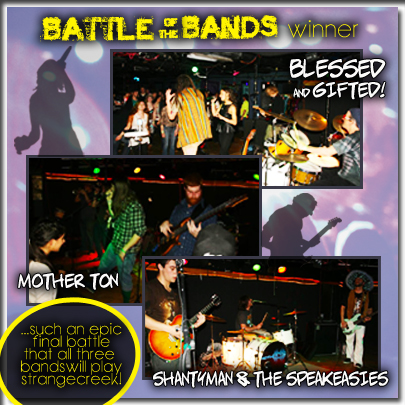 CONGRATULATIONS TO BLESSED AND GIFTED

Catch them, plus Shantyman & The Speakeasies and Mother Ton
at StrangeCreek Campout 2014

As March wraps up, so does the 2014 StrangeCreek Battle of the Bands. It has been a wonderfully musical adventure full of consistently funky dilemnas culminating in a Final #BattleWormRoyale that will go down in history. In short: it was epic. It was the funkiest dilemna of all and the decision was hard… but we wormed our way out of the consequences by inviting all three bands to play at StrangeCreek Campout 2014: Blessed and Gifted takes the coveted cabin spot, but make sure to check out sets from Shantyman & The Speakeasies, and Mother Ton. Dance floor jury duty is officially over — great thanks to bands and fans alike for making this a month we won’t soon forget!

STAY UP TO DATE AS MORE INFORMATION BECOMES AVAILABLE ABOUT THE LIVE BATTLE DATES AND LOCATIONS BY JOINING THE WORMLIST: